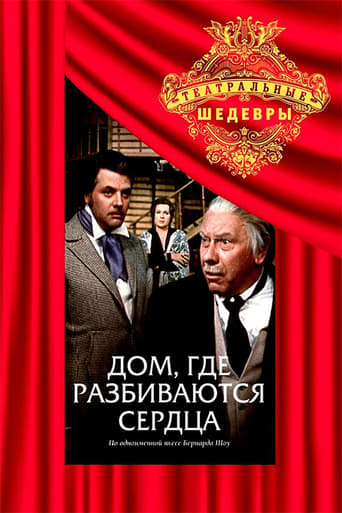 Heartbreak House is movie released on 1975 directed by Valentin Pluchek, Viktor Khramov, in languages Pусский has a duration of 177 minutes with a budget estimated at with a score on the IMDB site for 0.0 and with a cast of actors Georgi Menglet Nina Arkhipova Aleksandr Shirvindt . September evening, an unusual ark house, resembling a ship in shape, for its owner, the gray-haired old man, captain Châtover, sailed the whole life through the seas. A strange house where people behave differently. Young beauty sisters reign in this house, beckoning true gentlemen, as the light of a lamp beckons moths. This house fences its inhabitants from the outside world. Talk about the meaning of life, home entertainment, hopeless novels. And a premonition of trouble: at the same time, clouds of the First World were gathering over the good old England ...