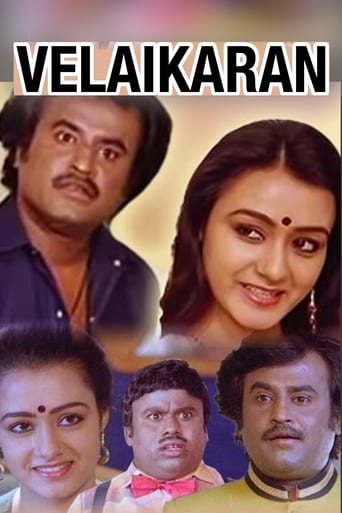 Velaikkaran is movie released on 1987 directed by S. P. Muthuraman, in languages தமிழ் has a duration of 140 minutes with a budget estimated at with a score on the IMDB site for 6.7 and with a cast of actors Sarath Babu Rajinikanth Amala Akkineni . Young Ragupathy was brought up by his paternal grandfather, Valayapathy. He decided to go to the city in search of a new job and life. In the city he meets Senthil, who guides him into an interview in a 5-star hotel owned by Rajkumar . While in the hotel, Ragupathy meets Kowsalya, and falls in love with her. During this time, many attempts are made to kill Rajkumar by his uncle and son Nassar. The blame for this murder attaches to Rajkumar's mother, who is actually Ragupathy's mother. Realizing all this, Ragupathy takes an oath that he will not let harm come to Rajkumar.