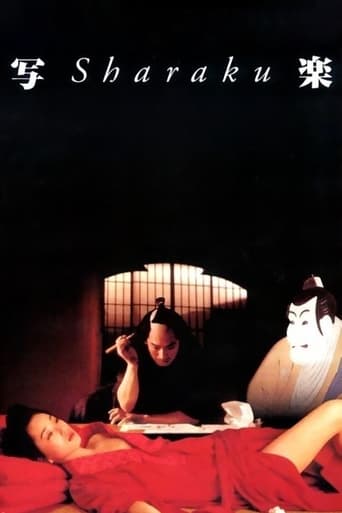 Sharaku is movie released on 1995 directed by Masahiro Shinoda, in languages 日本語 has a duration of 115 minutes with a budget estimated at with a score on the IMDB site for 6.1 and with a cast of actors Hiroyuki Sanada Frankie Sakai Shima Iwashita . The ukiyo-e (woodblock print) artist Sharaku is an enigmatic puzzle in the world of Japanese art. Working at an age when such masters of the trade as Hokusai and Utamaro were at their zenith, Sharaku suddenly emerged out of obscurity and produced roughly 140 strikingly brilliant portraits of Kabuki performers, only to disappear just as suddenly. To date, no one knows about his true identity or about his post-ukiyo-e career. Veteran director Masahiro Shinoda tries to fill in the blanks with this lavish period production. Set in the 1790s, the film centers on Tombo (Hiroyuki Sanada), a lowly Kabuki player who gets dumped from his troupe after breaking his foot. He joins a ragged traveling outfit run by former courtesan Okan. While not on-stage, he takes up drawing, for which he realizes he has considerable ability. His talents are noticed by Tsutaya Juzaburo, a ukiyo-e publisher who is desperate for a replacement after his star artist Utamaro defected to his rival's stable.