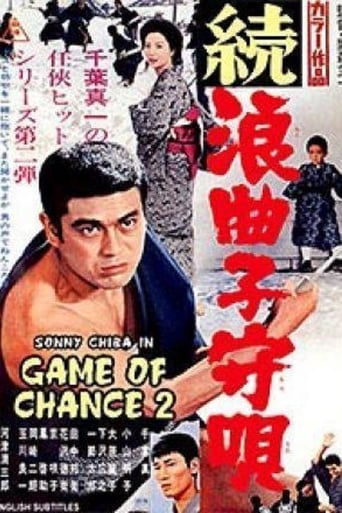 Zoku rokyoku komori uta is movie released on 1967 directed by Ryuichi Takamori, in languages 日本語 has a duration of 88 minutes with a budget estimated at with a score on the IMDB site for 0.0 and with a cast of actors Hiroyuki Sanada Sonny Chiba Akiko Koyama . Bungo is released from prison to find his son Kenichi in the care of strangers. Teruko, the woman originally looking after the boy, was forced to leave town and sell herself into prostitution. Bungo and Kenichi, in their search for Teruko, arrive in a new place and find work running a peddling stall for the upright Tatsumaki family. However, the drifting father and son soon find themselves caught up in a struggle for territory. Boss Negishi, the head of the yakuza family responsible for the death of the former Tatsumaki leader, will stop at nothing to take over the marketplace. Sickened by the injustice, Bungo takes on the rival boss knowing it might cost him his newly acquired freedom..