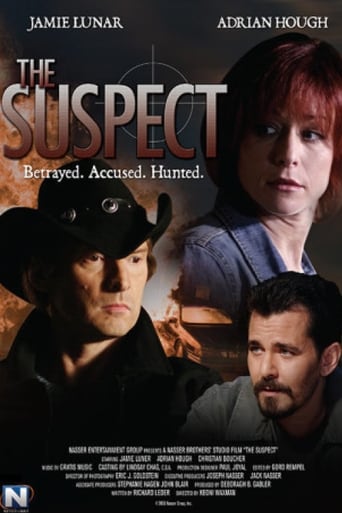 The Suspect is movie released on 2006 directed by Keoni Waxman, in languages English has a duration of 88 minutes with a budget estimated at with a score on the IMDB site for 7.0 and with a cast of actors Adrian Hough Alf Humphreys John Tench . Fenton, California is shocked when local lawyer Paul James, a model citizen and house-father considering to stand in municipal elections, is shot in his instantly torched car in front of his home. His second wife Beth is arrested and charged after cash and the murder weapon, Paul's own gun, are found. Insurance investigator Jerry Calhoun, a former cop, on the case because Paul had a life insurance since three weeks, realizes lazy police detective Rhodes's utter incompetence. When Beth escapes, even step-daughter Robin still reports her to the police. Calhoun however makes sure the truth is discovered starting from blackmail and embezzlement Paul was involved in.