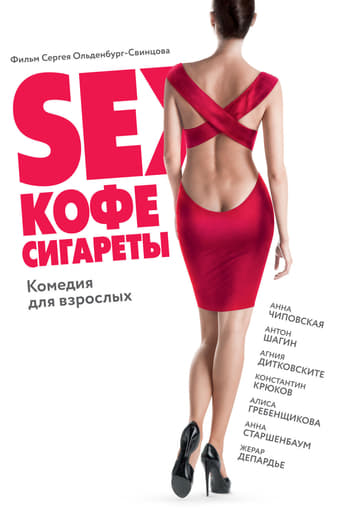 Sex, Coffee, Cigarettes is movie released on 2014 directed by Sergey Oldenburg-Svintsov, in languages Pусский has a duration of 85 minutes with a budget estimated at with a score on the IMDB site for 4.0 and with a cast of actors Gérard Depardieu Anna Chipovskaya Anton Shagin . Eleven comedic vignettes featuring conversations – some important, some less so – held in restaurants over coffee and cigarettes (how quickly time flies – cigarettes are banned in Russia’s restaurants now). The conversations are candid, and even veer into the territory of murder. In the final credits, the director apologizes to Jim Jarmusch, whose work (in the anthology Coffee and Cigarettes, which Jarmusch shot in pieces over many years) Oldenburg-Svintsov is clearly indebted to. Sex, Coffee, Cigarettes’s kinship with Jarmusch’s film extends to the fact that superstars play tiny roles in almost all of the vignettes.