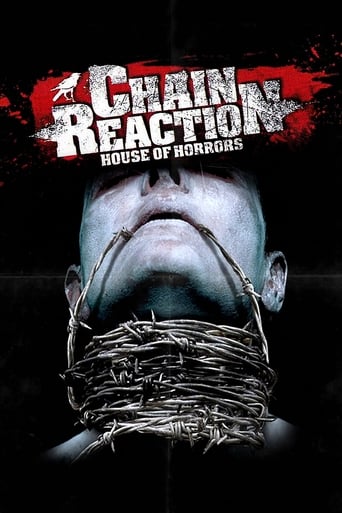 Chain Reaction is movie released on 2006 directed by Olaf Ittenbach, in languages Deutsch | English has a duration of 101 minutes with a budget estimated at $1,066,480 with a score on the IMDB site for 5.0 and with a cast of actors Jürgen Prochnow Jaymes Butler Christopher Kriesa . A prison bus with over a dozen criminals on board has an accident and rams another car, in which Dr. Douglas Madsen was on his way home. Most of the prisoners die. Four of them survive, one of them severely injured. After having killed all the guards, they head for the woods. They take Dr. Douglas Madsen hostage. Suddenly a huge house appears in the middle of the woods. The leader of the group, Arthur, emphasizes that he will kill Douglas and every single member of the "family" if his wounded brother would die. Meanwhile some members of the family show strange behavior, and very soon mayhem breaks loose.