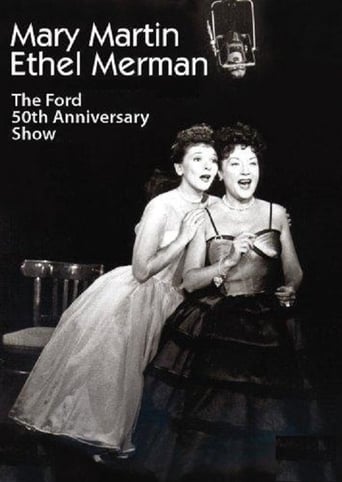 The Ford 50th Anniversary Show is movie released on 1953 directed by Jerome Robbins, in languages English has a duration of 120 minutes with a budget estimated at with a score on the IMDB site for 8.0 and with a cast of actors Ethel Merman Mary Martin . The program was the first so-called "Television Spectacular". Ford presented the show without commercial interruption. It is believed to be the first time that Edward R. Murrow appeared on NBC in a professional capacity. Also, in 1953, it was necessary for Ford to buy time on two networks to ensure maximum coverage of US TV households - at the time, neither CBS nor NBC reached 100% of them. The famed 1953 television special celebrating the Ford Motor Company's 50th anniversary brought together two of the greatest leading ladies Broadway has ever known. The highlight of the program is Merman and Martin’s 13-minute duet medley, where they sing the songs that made them famous, plus much more. On their own, Merman sings “Alexander’s Ragtime Band” and “Mademoiselle from Armetières” and Martin performs a brilliantly comic routine about changes in fashion over the first half of the 20th century.